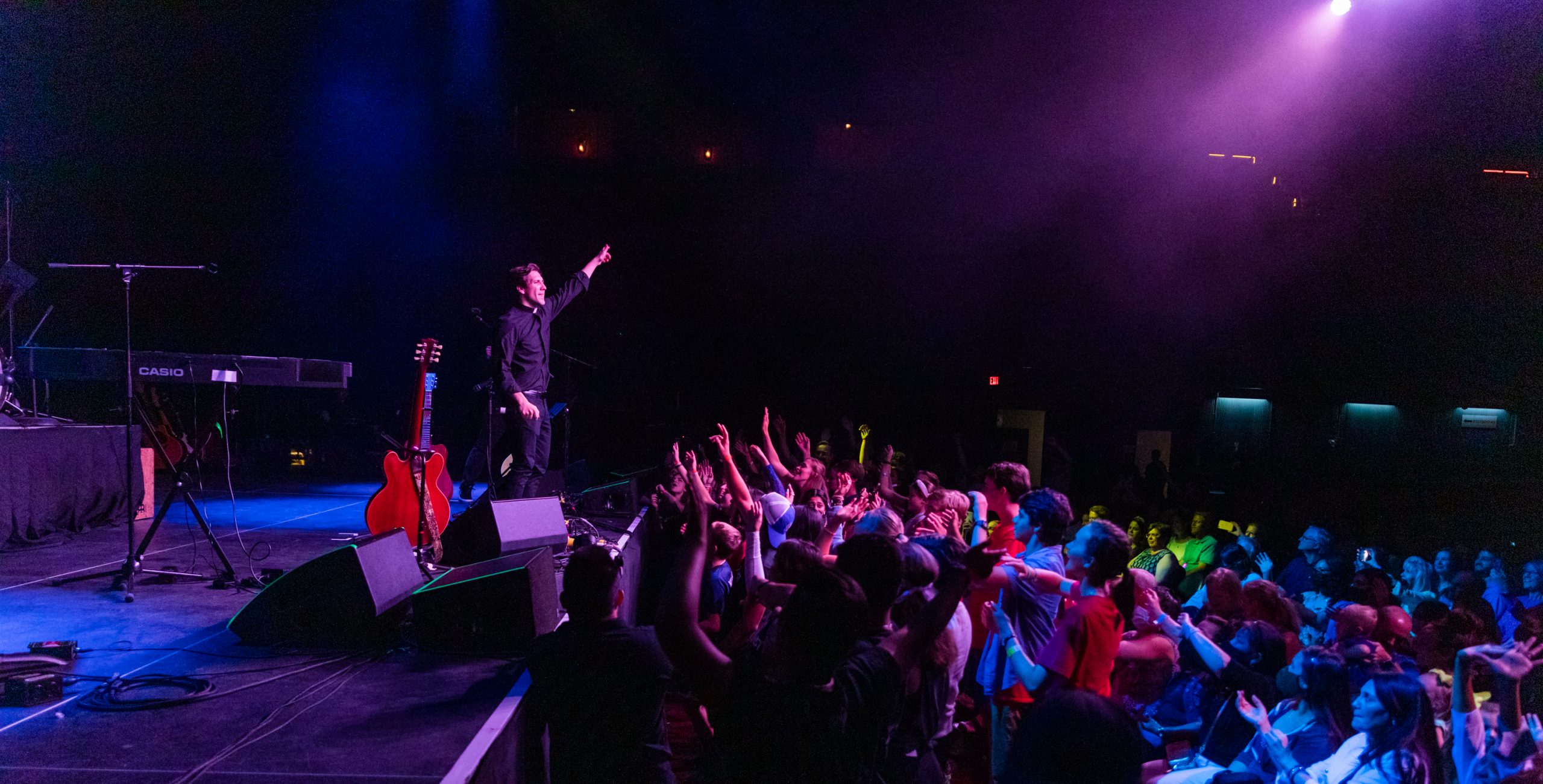 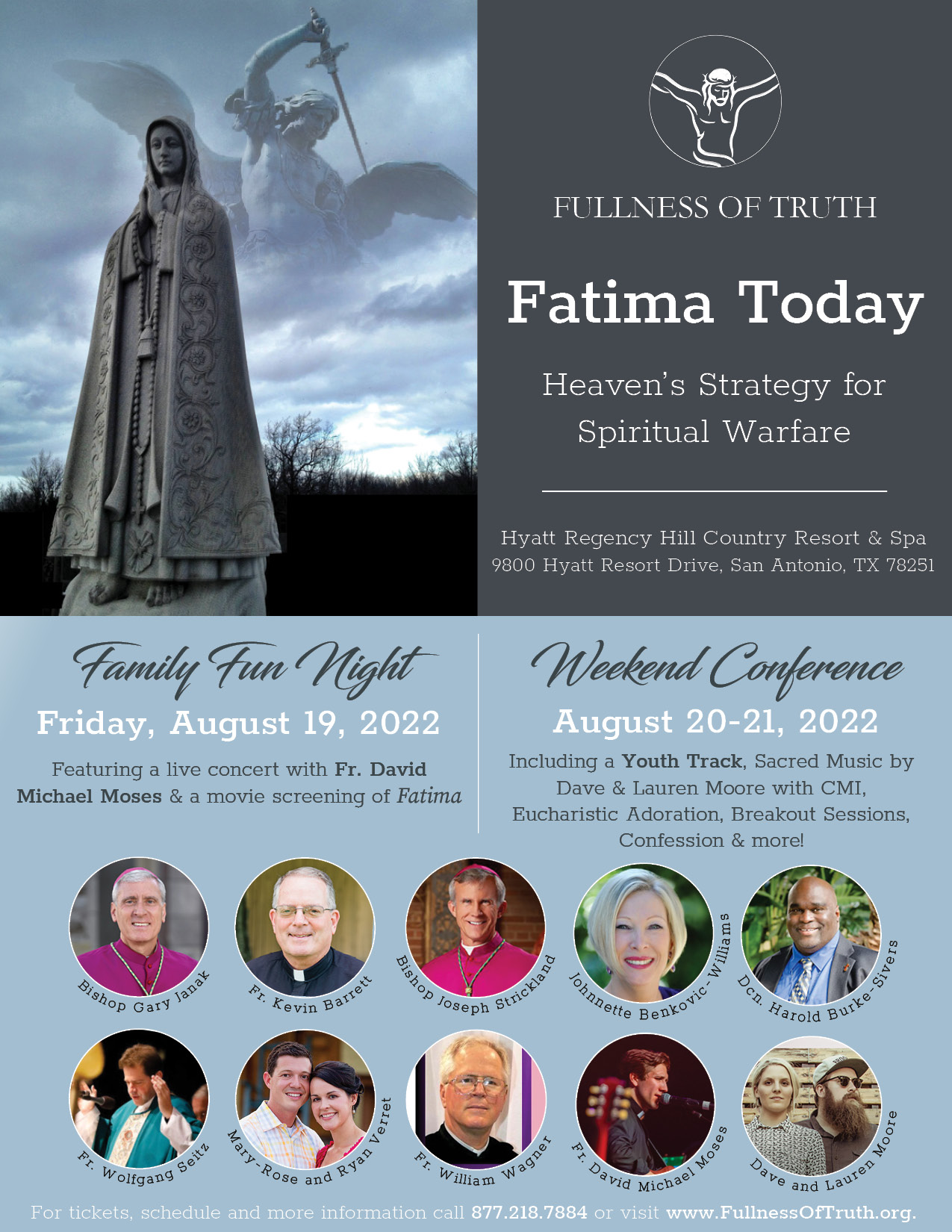 To make your room reservations for additional hotels in the San Antonio area, please keep reading.

If you have not yet registered your hotel, you are still welcome to attend and find discounts on hotels in the San Antonio area.

Click the button below for a list of additional hotels in San Antonio that are available for booking. Deacon Harold Burke-Sivers – known around the world as the “Dynamic Deacon” is one of the most sought-after speakers in the Church today. He is a powerful and passionate evangelist and preacher, whose no-nonsense approach to living the Catholic faith will challenge and inspire many.

He travels the world speaking at conferences, workshops, retreats, parish missions, high schools, and young adult events.  Deacon Harold holds a Bachelor of Arts Degree in Economics and Business Administration from the University of Notre Dame, and a Master of Theological Studies Degree from the University of Dallas. He co-hosts the national weekly broadcast “Living Stones” on Mater Dei Radio. Deacon Harold has appeared in the major feature film Power in My Hands and is the creator of Walk by Faith Wednesday Webinars, a weekly hour of Catholic catechesis and teaching. , he is the host or co-host of several popular series on EWTN television and is featured on the renown Chosen faith formation program by Ascension Press. Deacon Harold is an award-winning author who has written five books, including Behold the Man: A Catholic Vision of Male Spirituality, Father Augustus Tolton: The Slave Who Became the First African-American Priest, and the acclaimed new book Our Life of Service: The Handbook for Catholic Deacons.

Fr. Wolfgang Seitz is a member of the Order of Canons Regular of the Holy Cross, an international Order which has its Mother House in Austria. He is the Superior of the Community in Detroit & national Director of Opus Angelorum. He studied at the seminary of the Order in Anápolis, Brazil, he was ordained a priest in 2002.

He was then sent to Assumption Grotto Parish in Detroit, MI. Since then, he has been giving retreats and conferences throughout the United States.

Fr. Kevin Barrett’s preaching has been instrumental in spreading the AFC’s message of Family Consecration for many years. After a pilgrimage to Fatima in 1982 that opened his heart to the priesthood, Fr. Kevin met AFC founders Jerry and Gwen Coniker and joined the AFC’s mission to sanctify families.

He was first a Catholic Corps Member and later became a chaplain. Fr. Kevin was ordained by Pope St. John Paul II in 1992 and served for twenty-three years as the AFC’s chaplain. From 2016–2020, Fr. Kevin ministered in the Diocese of Cheyenne, WY.

After years of being a non-practicing Catholic, in 1981 Johnnette experienced a deep conversion back to her Catholic faith. Her conversion sparked a new vocation: that is, one of sharing the Gospel message through the utilization of media. She has been an inspiring and consistent presence on Catholic radio (1987) and in Catholic television (1988) ever since. Johnnette is the Executive Producer of the Women of Grace® television program, a program highlighting contemporary issues from a Catholic perspective which also discusses authentic femininity™ in the world today. She is also host of Women of Grace® Live, a call-in radio talk show airing five times a week. She is heard nationally on AM/FM stations, Sirius Satellite 160, and internationally via short wave radio.

Mary-­Rose and Ryan Verret are the founders of Witness to Love and the authors of Witness to Love: How to Help the Next Generation Build Marriages that Survive and Thrive. Mary­-Rose is a featured presenter in the series “Doors of Mercy” released by St. Benedict Press for the Year of Mercy.

Together the Verrets speak on issues regarding marriage, mercy, faith, family and fertility. Mary-­Rose has been interviewed by: The National Catholic Register, EWTN, The Catholic World Report, Catholic News Agency, The Gus Lloyd Show, Aleteia, and secular media outlets. Ryan completed graduate studies in Theology, Clinical Psychology, and Medical Ethics and worked for several years in the field of healthcare administration. Since 2010, Ryan has worked primarily in the development of legislative and educational efforts that develop the Culture of Life both in Louisiana and throughout the United States and Canada.
Together Ryan and Mary-Rose speak on issues regarding evangelization, marriage, NFP, miscarriage and medical ethics. They are frequent guests on EWTN’s Catholic Radio for Acadiana and they reside in the heart of Cajun Country with their four children. Their passion is teaching couples to share their marriage with others!

Joseph Edward Strickland serves as the 4th Bishop of Tyler. Bishop Strickland was born the sixth child of Raymond & Monica Strickland in 1958. He grew up near Atlanta, Texas, where the Strickland’s were founding members of St. Catherine of Sienna Church. He graduated from Atlanta High School 1977

Called to the priesthood, he entered Holy Trinity Seminary and the University of Dallas in August of 1977. On June 1, 1985, Strickland was ordained to the priesthood for the Diocese of Dallas by Bishop Thomas Tschoepe at St. Monica Catholic Church. He was assigned as a newly-ordained priest to Immaculate Conception Parish in Tyler in June of 1985 and served as parochial vicar until June of 1989.

Upon the creation of the Diocese of Tyler in 1987, Father Strickland then joined the presbyterate of the new diocese and was named the first vocation director in March of 1987 by Bishop Charles Herzig. He was assigned as parochial vicar of Sacred Heart Parish in Nacogdoches in June of 1989 and served there until October of that same year when he was assigned as pastor of St. Michael Parish in Mt. Pleasant. In August of 1992, he  he was assigned to study canon law at Catholic University of America.

After completing his licentiate (JCL) in canon law in May of 1994, Father Strickland was assigned by Bishop Edmond Carmody as pastor of the Cathedral of the Immaculate Conception in Tyler. He was appointed judicial vicar for the diocese in 1995 and was named a Prelate of Honor with the title of Monsignor by Pope John Paul II in 1996.

When Bishop Carmody was named Bishop of Corpus Christi in March of 2000, Mgr. Strickland was elected diocesan administrator for Tyler and served in that capacity until January of 2001 when Bishop Álvaro Corrada was installed as the third Bishop of Tyler.

In September of 2012, Pope Benedict XVI named Msgr. Strickland as the fourth Bishop of Tyler. He was consecrated as bishop on November 28, 2012 by Cardinal Daniel DiNardo of Galveston-Houston.

Father Janak was born March 22, 1962 in El Campo, Texas. He graduated from Palacios High School in 1980 and attended Wharton Junior College and the University of Texas, Austin (1980-1982) and received a Bachelor of Arts in history from The College of Santa Fe in New Mexico (1982-1983).

He received a Master of Divinity from Oblate School of Theology in San Antonio, Texas (1983-1988) and a Licentiate in Canon Law (JCL) from The Catholic University of America in Washington, D.C. (1993-1995). He received a Master of Education in counseling from University of Houston-Victoria in Victoria, Texas (1995-1997) and is a Licensed Professional Counselor for the State of Texas (2000 to present). He attended Immaculate Heart of Mary Seminary in Santa Fe, New Mexico and Assumption Seminary in San Antonio, Texas, and was ordained a priest for the Diocese of Victoria on May 14, 1988.

Fr. William Wagner, grew up in Santa Barbara, California & was the third of seven children. After finishing his BA in English and French Literature at Loyola-Marymount in 1972. He went to Rome as an independent student to commence his studies for the priesthood at the Angelicum, University of St. Thomas Aquinas.

In 1973 he finished his BA in Philosophy. That same year he joined the fledgling community of the Brothers of the Holy Cross in the Work of the Holy Angel at St. Petersberg in Silz, Tirol, Austria. The following year he returned to Rome to continue theology at the Angelicum; he was ordained on July 2, 1977.

That same summer (1977-1978) he took part in the restoration of the Canons Regular of the Holy Cross. Thereafter he returned to Rome for further studies, finishing with a STD (doctorate) in theology in 1983. The Dissertation bore the title, The Mission of the Holy Angels in the Economy of Salvation.

From 1983-1994 he was stationed at Fátima, Portugal. From there as a base, he preached extensively in the USA in the 1980’s spreading the Work of the Holy Angels; he managed to preach in nearly every state in the Union. In Europe he has preached in Italy, Austria, Switzerland, Germany, Portugal and France.

In 1994 he returned to Rome, where he initially as superior of the Order’s study house. In 1996 he was appointed to the General Council of the Order, in which capacity he served for 19 years until summer of 2015.

Having finished his terms of office he was returned to the United State, after having lived 43 years in Europe. He is currently stationed at St. Gabriel Monastery in Carrollton, Ohio. Since then he has been reintegrated in the Order’s preaching band, especially giving retreats and missions for the Work of the Holy Angels. In 2016 he gave the talks on angelology (on the trial and the grace of the Holy Angels according to St. Thomas) to the Congress of Exorcists in Tulsa, Oklahoma.

Dave Moore has more than 15 years experience as a Catholic Musician and Recording Artist, and is currently the Resident Worship Leader for the Diocese of Dallas OYYACM. He is an early pioneer for Nights of Worship in the Catholic Church. He has mentored over 30 Catholic Musicians.

He also has recorded and/or produced liturgical and non-liturgical music for more than 50 different artists. When not writing and arranging music for the Mass, Dave also enjoys serving as a music consultant for Catholic Parishes and events, and lending his support to fellow musicians. Lauren Moore holds a Bachelor of Music in Vocal Performance and has served for over 15 years in Catholic Music Ministry. With over six years of experience as a Private Instructor for Piano and Vocal performance, she shares Dave’s love for writing and arranging music for the Catholic Church. This, coupled with her proficiency in music notation software and recording studio management, poises her to handle the Create portion of CMI with adept skill and knowledge of what is needed to complete the outlined projects. Lauren's passion is creating and performing music for the edification of the Catholic Church.

6:30 AM: Registration and Bookstore Opens

11:00 AM: “The Angel of Fatima: The Challenge for Authentic Peace in our World” - Fr. William Wagner

4:30 PM: “The Scapular, the Rosary, and the Salvation of the World” - Johnnette Williams

7:00 AM: Registration and Bookstore Opens

8:00 AM: “The Front Line of the Battle: Your Catholic Family! - Ryan and Mary Rose Verret

9:15 AM: “The Triumph of the Immaculate Heart: A Family Life of Consecration and Reparation”- Fr. Wolfgang Seitz

1:15 PM: “An Apocalyptic Awakening!: The Message of the Blessed Virgin Mary for Our World” - Dcn. Harold Burke-Sivers

SCHEDULE IS SUBJECT TO CHANGE 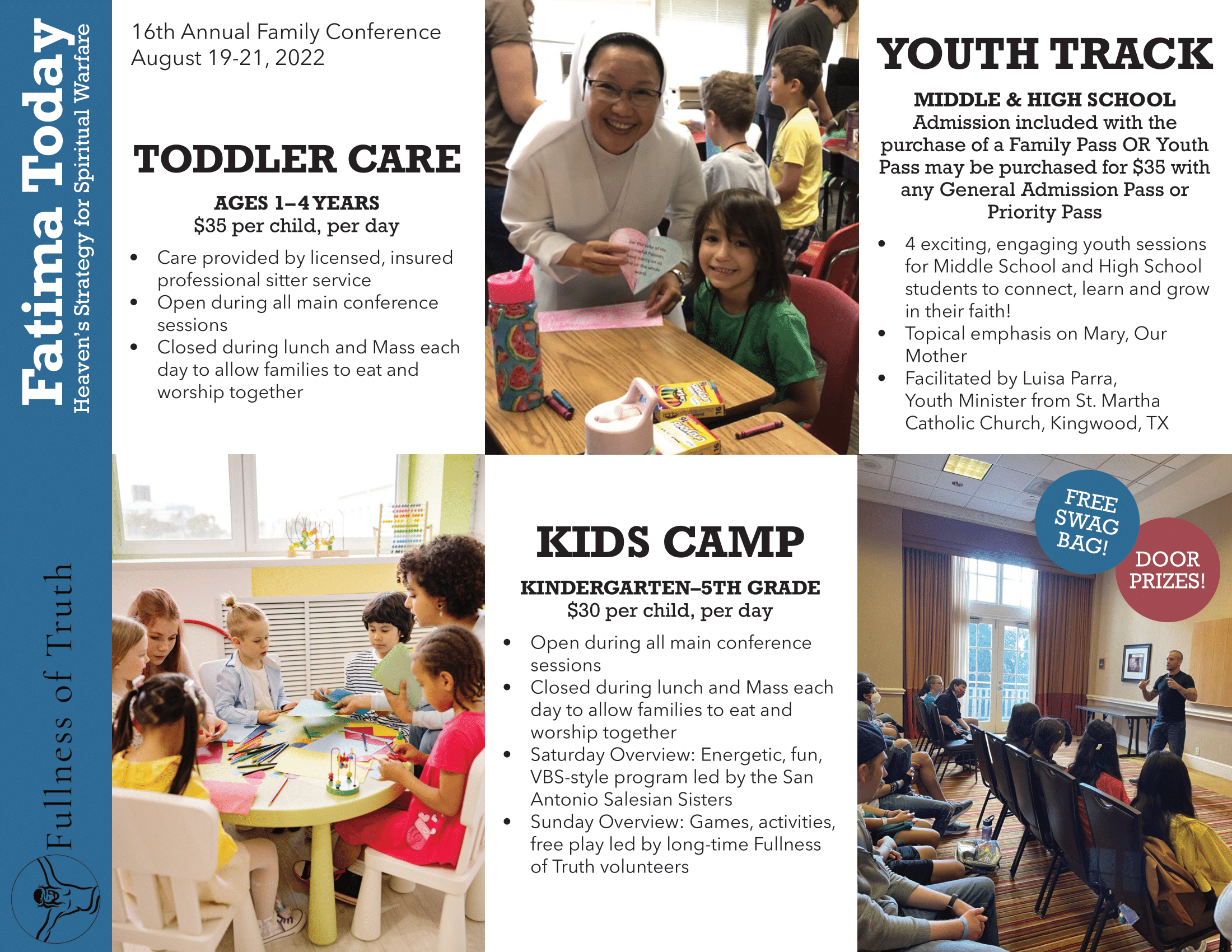 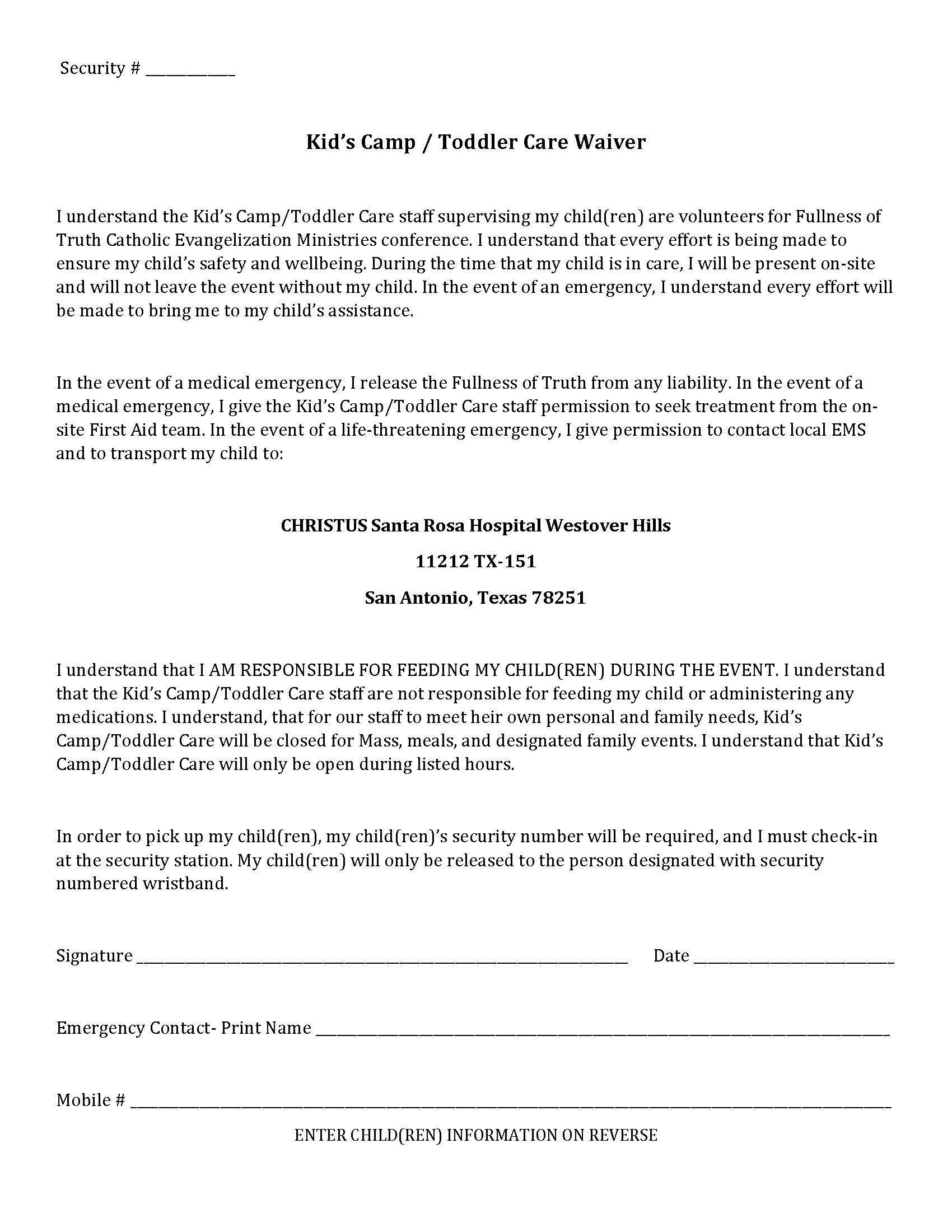